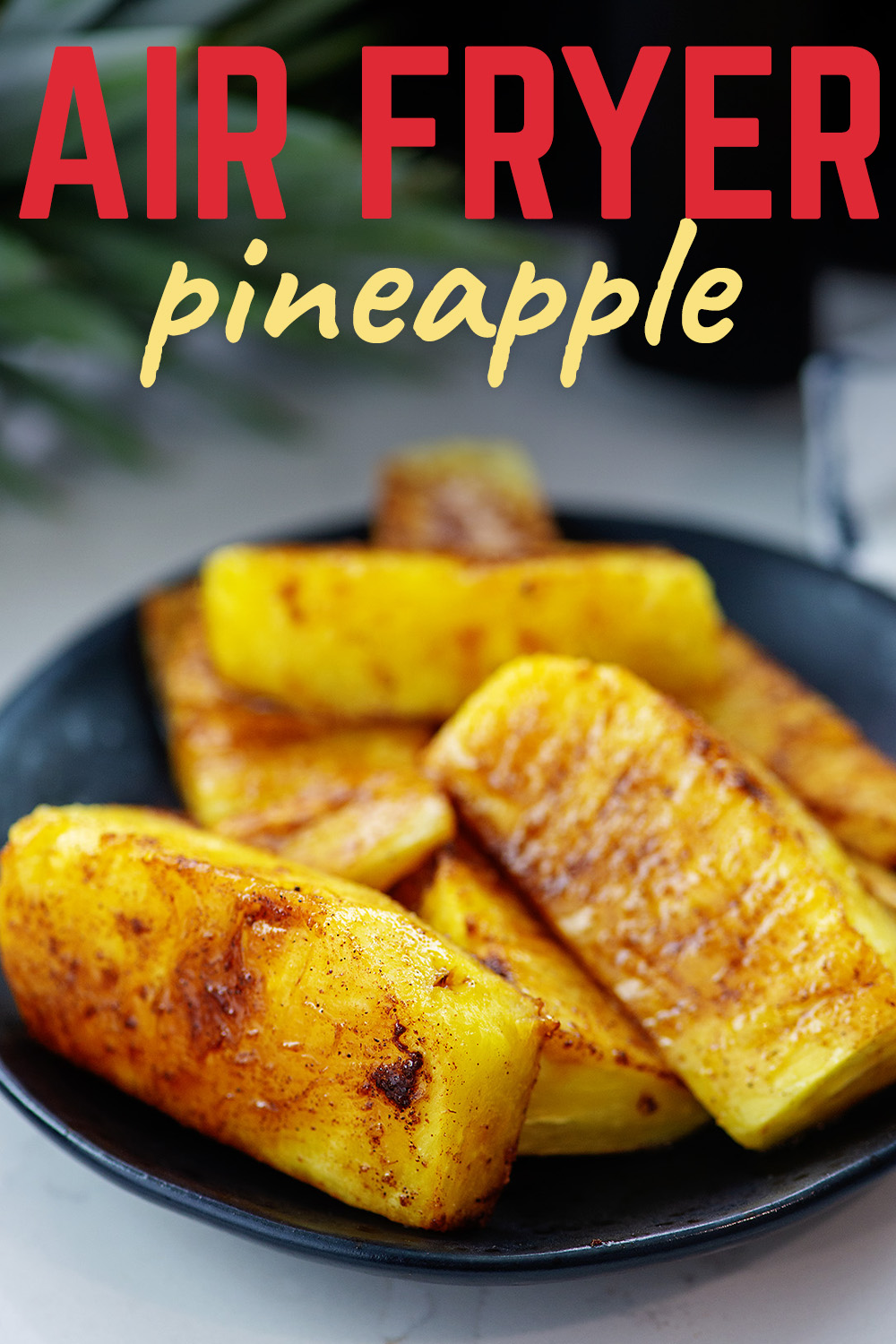 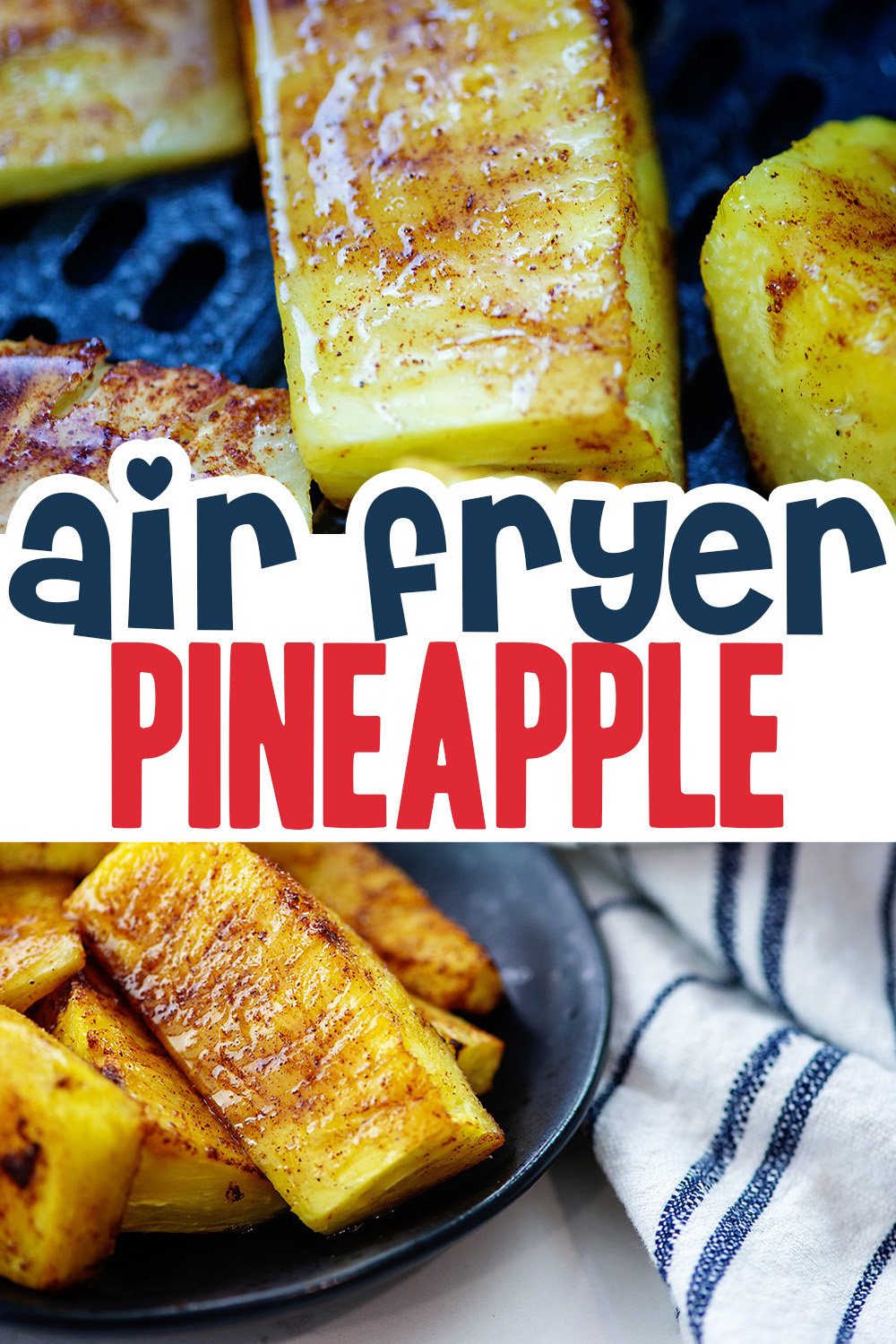 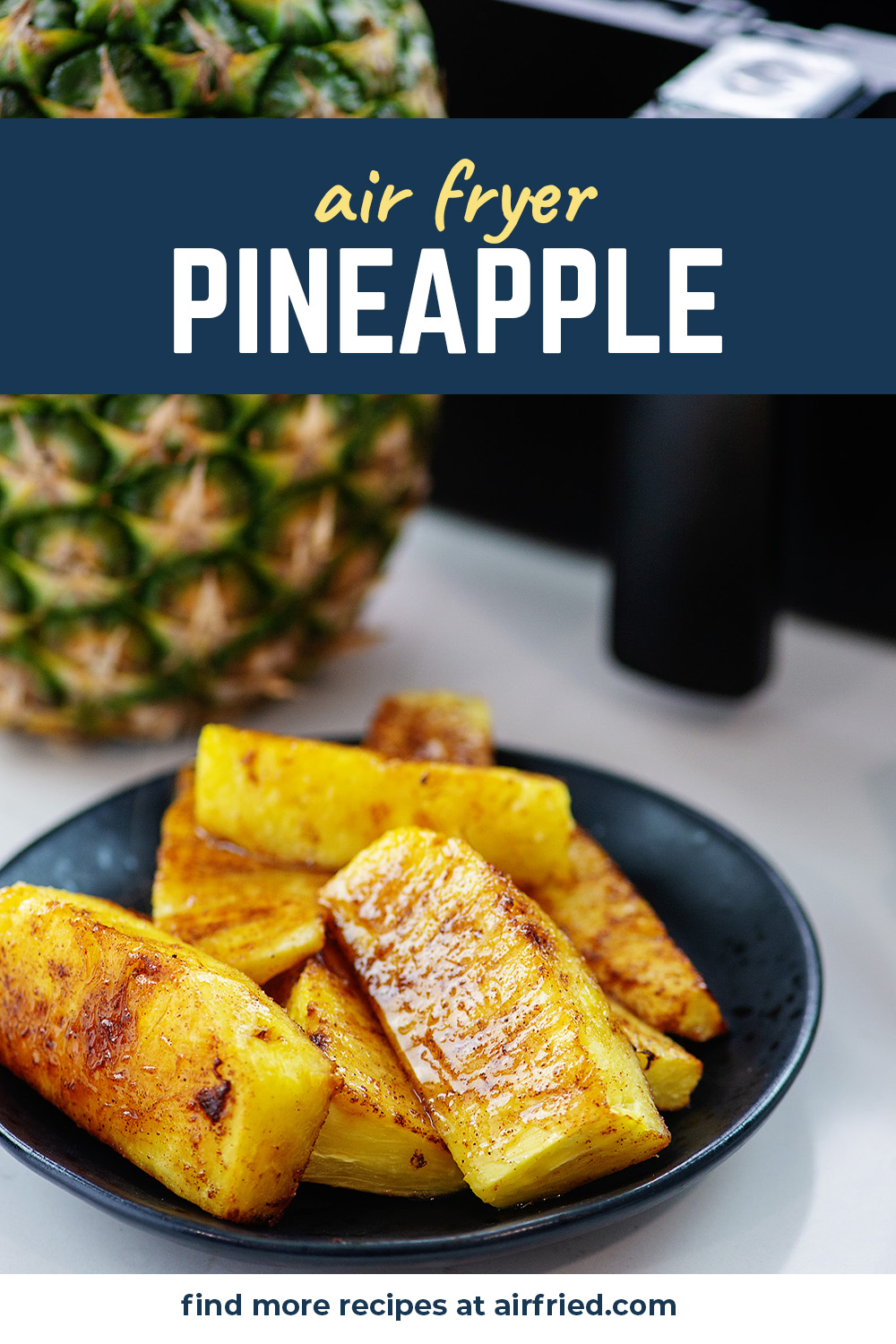 This Air Fryer Pineapple Recipe tastes just like the pineapple we get from our favorite Brazilian steakhouse! It’s rubbed with a bit of cinnamon and brown sugar and then roasted in the air fryer. So sweet and impossible to resist!

My first experience with cooked pineapple was at a Brazillian steakhouse. One of those places where they walk around with a bunch of platters of meat and cut it right onto your plate. I love those places!

Anyway, they usually have a grilled pineapple that they come around to your table with also. At first, you’re like why would I eat pineapple when there is steak? Then you take a small piece and you realize that from now on you’ll mostly be coming to this steakhouse because you’re craving the pineapple! 😉

We toss pineapple on the grill anytime we can, but it was time to test things out in the air fryer!

This air fryer pineapple reminds me so much of my favorite Brazilian steakhouse! We often make this just as a quick treat, but sometimes we’ll serve it next to steak and pretend we’re at a fancy restaurant. 😉

Pineapple – While this recipe would work with canned pineapple, fresh is best. Tips below on choosing the perfect one!

Brown Sugar – We use dark brown sugar, but light brown is also good!

Melted Butter – This adds a bit of richness to the pineapple.

Cinnamon – Gives the pineapple a cozy warmth. Almost makes this taste like pie!

How to pick a pineapple:

Picking a good pineapple is easy if you know a few tricks!

The outside of the pineapple is a bit pointy, but you do need to give it a firm squeeze. If it gives a little bit, it is likely ripe, so go with that. If it doesn’t have any give to it then you need to try a different one. Like most fruit, it should have a bit of softness to it, but not be mushy.

The heavier a pineapple is, the juicier the pineapple will be. Pick one that feels a bit heavy for its size!

Another tip is to smell the bottom of the pineapple. It should have a sweet pineapple smell. If it doesn’t, it is unlikely to be ripe. You may look a little funny sniffing pineapple butts in the supermarket, but it is worth it to get a good pineapple.

Finally, grab the center leaf and give it a tug. If it pulls away easily, it’s ripe!

Pro Tip – If I ever smell pineapple when walking by them at the store, I stop and find a good one. If you can smell them without trying, they’ve probably got some good ones!

How to Cut a Pineapple:

For this air fryer pineapple recipe, we like to cut our pineapple into small spears or larger sized chunks.

To start, lop the top and bottom off of your pineapple so that you can easily stand it up on a flat surface.

Cut the pineapple in half from top to bottom.

Run your knife around the outside to remove all of the skin. Take a pairing knife and remove any eyes that you missed.

Cut the halved pineapple in half again and stand it up straight. Run your knife down the center to remove the core.

Slice the remaining pineapple into whatever size you like. We chop each piece into thirds or fourths lengthwise and then cut them into shorter lengths.

How to air fry pineapple:

Season the pineapple – In a small bowl, combine brown sugar and cinnamon with a pinch of salt and stir to combine. Brush melted butter onto the pineapple spears and then sprinkle with the cinnamon-sugar mixture.

Cook the pineapple– Put your pineapple in the air fryer basket with a little space between each piece for air to flow and air fry at 400 degrees F for 10 minutes.

How should I serve this pineapple?

This is a delicious treat on it’s own or served alongside steak, like they would at a Brazilian steakhouse. Make it dessert by serving this pineapple warm over a bowl of vanilla ice cream. 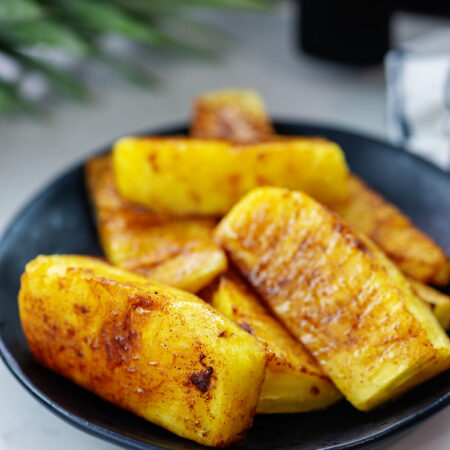 
Course Air Fryer Snacks
Cuisine American
Prep Time 5 minutes
Cook Time 10 minutes
Total Time 15 minutes
4 servings
This pineapple is brushed with cinnamon and brown sugar and then air fried for 10 minutes. The favors remind me us of the pineapple we eat at our favorite Brazilian steakhouse!
Print
Pin
Share
Rate
Prevent your screen from going dark

Serve as is for a delicious snack or side dish, or serve with ice cream for dessert. 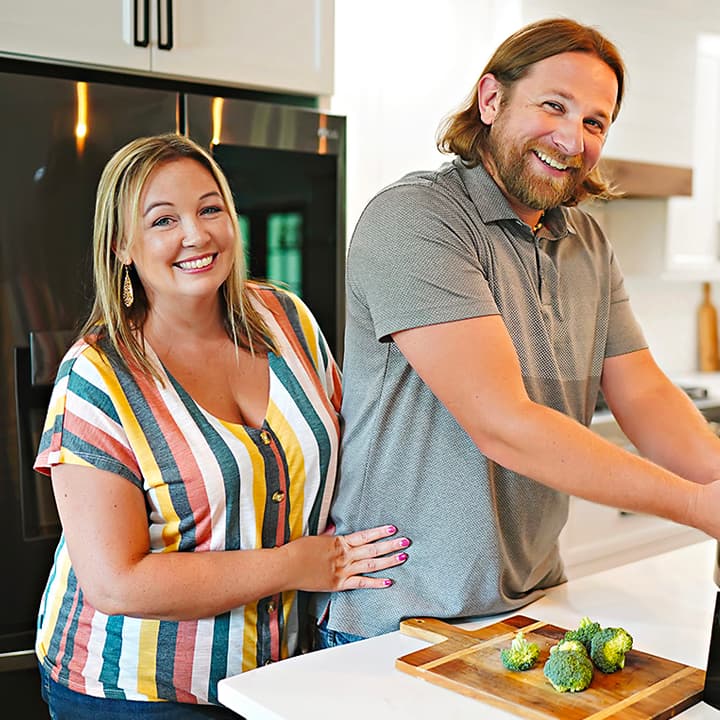