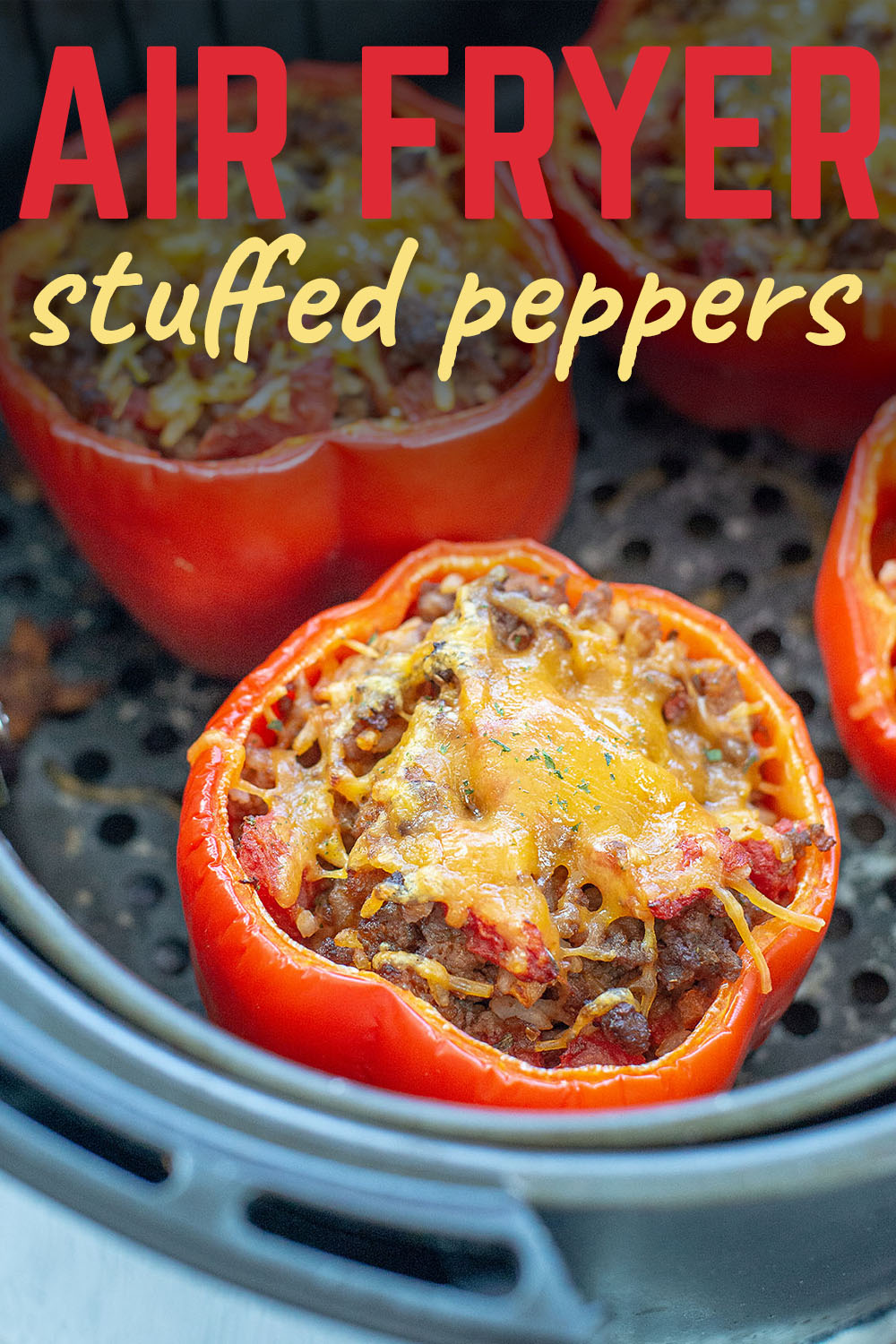 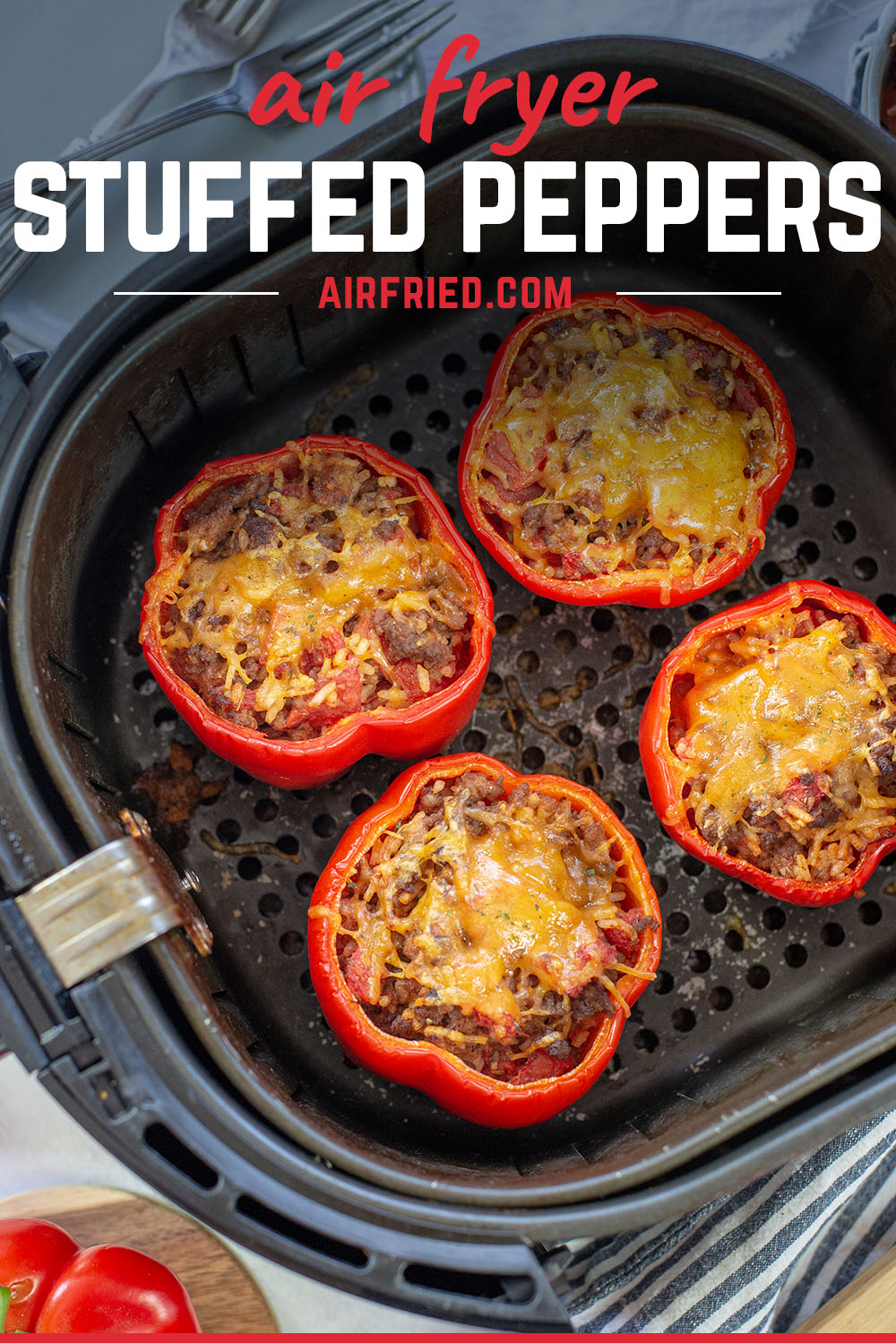 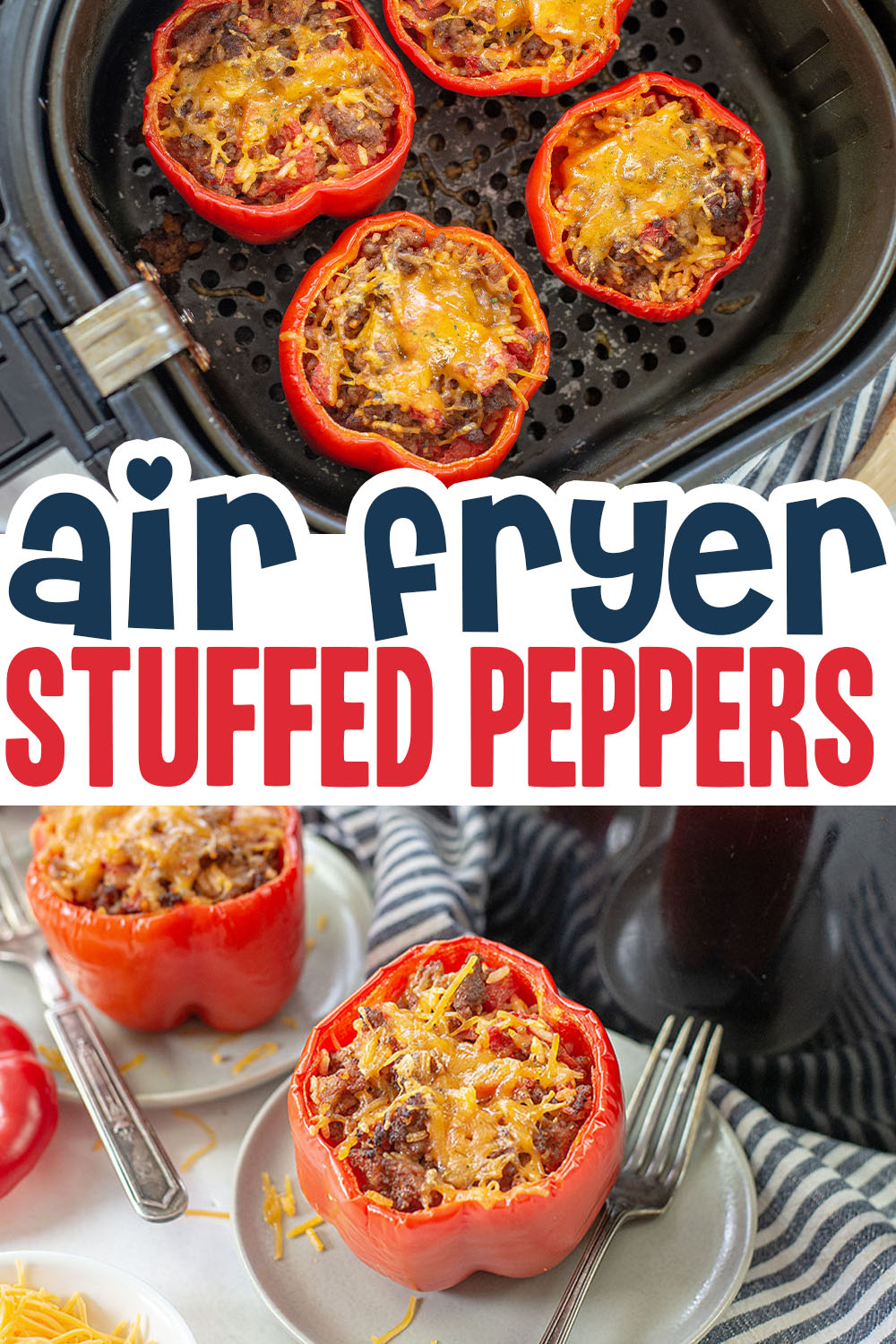 I was never a huge bell pepper fan growing up, but now I’m a sucker for the red ones!

I’ll leave the green bell peppers for literally anyone else, but you’ll have to fight me for the sweet red peppers! Whether they’re raw and crisp or cooked and tender, I love them!

We make stuffed peppers often here, filled with a blend of beef and sausage, loaded with rice and cheese, and baked until tender. Baked?! Yeah…not anymore. Now we’re making them in the air fryer!

Air Fryer Stuffed Peppers cook in about half the time they would in the oven!!

Peppers -You’ll need 4 large peppers. Look for ones that are somewhat flat on bottom so you can stand them up. Any color works – we prefer the sweeter red variety, but green, yellow, or orange are all fine.

Cheese– We usually go for shredded cheddar, but whatever cheese you have in your fridge should work fine.

How to Make Stuffed Peppers in an Air Fryer:

Brown the meat – Brown the beef and Italian sausage together, crumbling it as it cooks.

Filling – Add the onions and garlic to the skillet and let those soften. Stir in the rice, tomatoes, tomato sauce, and seasoning. Mix well.

Air fry the peppers- Add your peppers to the air fryer keeping them upright. If you are struggling to keep them upright you can use little balls of foil to help them stand upright. Spoon the filling from your skillet into the peppers. Air fry for 12-15 minutes at 360 degrees F. Sprinkle the tops of the pepper with cheese and let it sit in the air fryer for one additional minute.

Should I boil the peppers before air frying them?

This recipe does not require boiling the peppers before cooking them. We fill them and let the raw peppers cook in the air fryer. They’ll be tender crisp when done.

What should I serve as a side for stuffed peppers?

A simple green salad or steamed or roasted vegetable is the perfect side dish for stuffed peppers.

Can I freeze extra stuffed peppers?

YES! You can freeze them in individual freezer bags and then reheat them in the air fryer when ready to eat again. Reheat at 350 degrees F for 10 minutes.

If you are a pepper lover, you can save the tops of the peppers and dice them up. Then later add them to the filling in the pepper or save them for another use.

Did you know that red bell peppers are just a more ripe green bell pepper? The more red the pepper, the riper it is and the sweeter it will be! 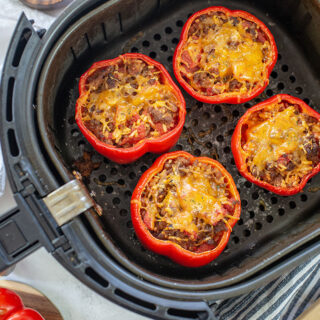 
Course Beef
Cuisine American
Prep Time 10 minutes
Cook Time 20 minutes
Total Time 30 minutes
4 peppers
It takes about half the time to make stuffed peppers in the air fryer as it does the oven and they turn out tender, flavorful, and perfect for a quick family dinner. These stuffed peppers are filled with ground beef, Italian sausage, and rice, but feel free to get creative with your fillings!
Print
Pin
Share
Rate
Prevent your screen from going dark

For a more tender pepper, cook in the air fryer at 330 degrees for about 5 minutes before filling with the meat mixture. Using balls of foil in the air fryer will help hold the peppers upright if you're unable to get them to stand on their own. Any color of pepper may be used. Red is the sweetest and our personal favorite.